What you will cover in 1 day in San Sebastian

In 1 day you will certainly be able to sample what San Sebastian is most famous for...the exceptional food scene in pintxos bars or michelin restaurants, and the convergence of old town architecture, modern life, beaches and green nature.

You will spend time in the Old Town and explore the San Sebastian shore line during your short 1 day visit. You’ll also learn a bit about Basque history and culture, a people who consider themselves distinctly separate from Castellanos (Spanish).

First priority to visit in 1 day:
Old Town:
The old town of San Sebastian is absolutely overflowing with eye catching pintxos covering the bar tops. The tiny streets are beautiful and it’s worth getting a little lost amongst them. And when you’re ready for a break just sit down and grab a pintxo with a txikito - a shot of the local white wine, txakoli - at any bar. They are all great! 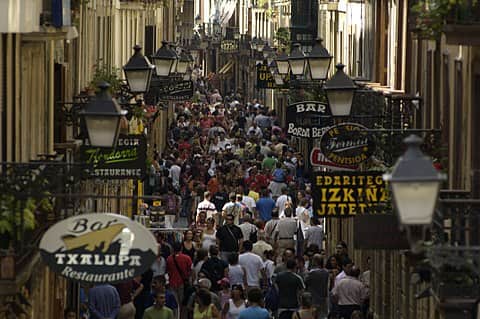 Source: Wikimedia
A typical street in Donostia Old Town
San Sebastian is a small city and the old town is like its beating heart. It is rumored to have the highest concentration of bars anywhere in the world. During your day you will meander in and out of old town. Be sure to linger for a while at Plaza de la Constitucion which used to be a bullring and is the venue for many festivities even today. 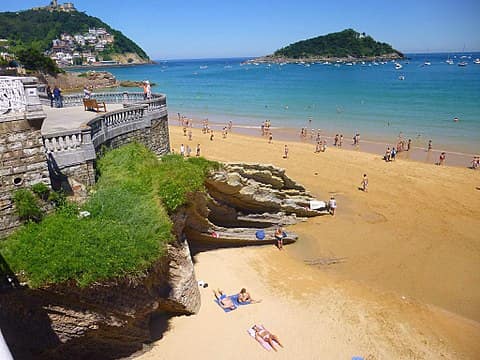 Source: Wikimedia
La Concha is just a minute's walk from the City Hall
Take a stroll along its length or jump in for a dip. The water is usually quite calm as it’s a well-protected bay.

Monte Urgull
At the eastern end of La Concha beach is Monte Urgull. You can reach the top (123 meters high) by foot on a choice of pathways, either winding your way slowly up or shooting straight to the summit. Though headed up hill, the paths are shaded by trees from the sun which will make your trek a bit easier.

Source: Wikimedia
Monte Urgull and Santa Clara Island from Monte Igueldo
You’ll be rewarded for your efforts with stunning views across Biscay Bay, La Concha beach and San Sebastian. At the summit of the hill you’ll find castle ruins, a small museum and a chapel.

Next priority to visit:
San Telmo Museo
The San Telmo Museum is focused on Basque culture. It highlights the arts, history and society of the people of this region in the context of Europe and of the world. 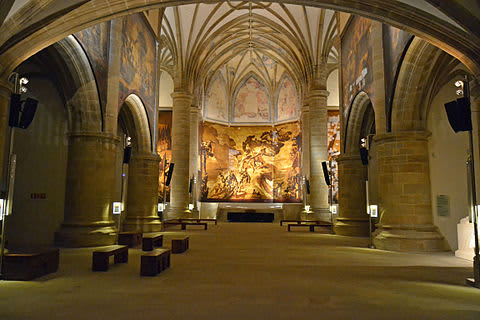 Source: Wikimedia
San Telmo was originally a Dominican monastery
The 16th century building, located in Old Town, was previously used as both a convent and an artillery barracks before being refurbished into the museum it is today.

Miramar Palace
Towards the western end of La Concha beach, on the opposite end from Monte Urgull sits this 19th century palace. Its expansive grounds sit right on the bay and are well maintained. If you prefer sunbathing on grass over sand then this is the perfect spot for you.

How to spend your 1 evening in San Sebastian

Make yourself a pintxo crawl. Head to old town and just pop in and out of pintxo bars. Order one or two of whatever looks good and continue on to the next one. 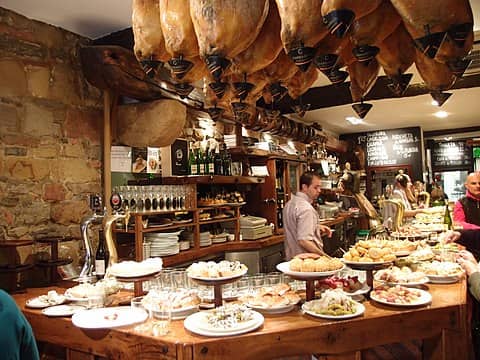 Source: Wikimedia
Pintxo bar
Throughout the evening pintxo goers will fill the streets of old town and surround the basilica steps, drinking, laughing, and enjoying Donostia (Basque for San Sebastian). On a longer trip you will have time for more exceptional food and drink, and of course to visit the famous cider houses.

What you cannot do in a day in San Sebastian

All the beaches
While La Concha is the most famous of the beaches there are others. In a day, you won’t have time to make it around to Playa de Ondarreta or Zurriola beach, just to name a few. You will also not be able to go to Monte Igueldo, on the west of La Concha.

Santa Clara Island
Just out from La Concha beach sits an uninhabited island which is home to a small chiringuito (beach restaurant) and a white lighthouse. It’s possible to swim or hop on a boat out to the little island but in a day, you won’t have much time to enjoy it.

Parque de Cristina Enea
A green oasis in the city. This park is a great spot to stroll, relax or spot one of the many peacocks roaming about. But it’s a bit outside of San Sebastian’s main stretch so in a day it won’t be relaxing to try to fit it in.

San Sebastian is a great spot to explore the entire region including Basque towns across the border in France. Ideally you spend 3 days in San Sebastian.

Tips to visit San Sebastian in a day

Do I need advance booking of Attractions?
No. Even in high season you shouldn’t have a problem getting tickets. In any case San Sebastian is less about ticketed buildings and more about nature and old town vibes in the streets.

How to travel within San Sebastian?
Walk! San Sebastian is quite walkable and there isn’t even any traffic through much of old town.

If you do need to get farther away there are bus lines which can take you. €1.70 for a day ticket, €2.10 at night or a rechargeable tourist card which costs €5.00 to buy and must be filled with a minimum of €5.00. Alternatively, San Sebastian has a city bike share program and miles of bike trails.

Should I buy a City card?
Maybe. The San Sebastian City Card costs €9.00, is good for multiple people, and buys you 6 journeys on public transportation as well as discounts throughout the city. If you are travelling with a large number of people it could save you some money since you only need to buy one. Otherwise, skip it.

Should I take the city sightseeing bus?
No, don't. Donostia San Sebastian City Tour buses don’t get great reviews. The cost is €12.00 and audio guide is included. However, the bus comes only once an hour and often runs later. So it’s not a reliable or convenient way to see the city.

Recommendation on walking tours
Maybe, but not really required for a 1 day visit in my view. San Sebastian is small, the walking tours generally take two hours and could be a good way to get an overview in the morning before deciding where you want to spend the rest of your day.

Alternatively, check out the pintxo walking tour and get a guided pintxo crawl of San Sebastian’s best gastronomy.