One day is enough to cover some highlights, get an idea of what the city is all about, but if you really want to dive into its culture and start feeling like a true Madrilenian, you’ll need a bit more time.

What you will cover in 1 day in Madrid

A single day in Madrid is best spent in el barrios (the neighborhoods) Centro and Retiro. Here you’ll get to experience a bit of Madrid’s history, you can see how the rich and powerful of the country live, both hundreds of years ago and still today. You’ll get to see some of Spain’s, and the world’s, most prized and famous artworks. 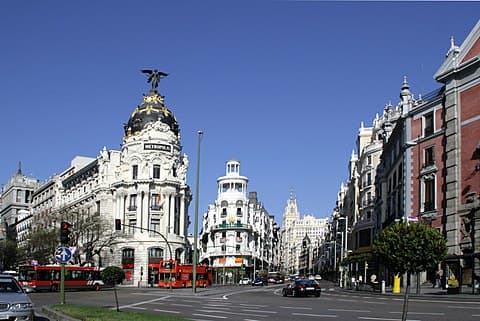 Source: Wikimedia
Gran Via in El Centro
You’ll wander through green space, breathe in the fresh air hundreds of trees provide and if you’re feeling low on energy you’ll refuel with a special Madrid treat!

First priority to visit in 1 day:

Royal Palace of Madrid
The Royal Palace of Madrid can be found not far from the metro station Opera. The first thing you’ll see is the impressive courtyards of what today continues to be the official residence of the royal family, though no longer their home. Before heading inside you should also take a look at the views which bring you away from the city out into the countryside bordering Madrid. 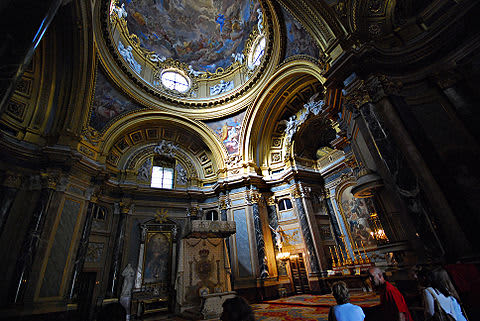 Source: Wikimedia
Stunning chapel inside the Royal Palace
Once you do make it to the interior of the palace you can choose between a guided tour or a basic ticket which you can also supplement with an audio guide. There are over 3,000 rooms in the palace including halls, banquet rooms, the main staircase, the throne room and more.

If you’re lucky enough to be here on a Wednesday or Saturday (except in July, August and September) be sure to look out for the changing of the guards between 11:00-14:00, infantry change every 30 minutes and horseback change every hour. 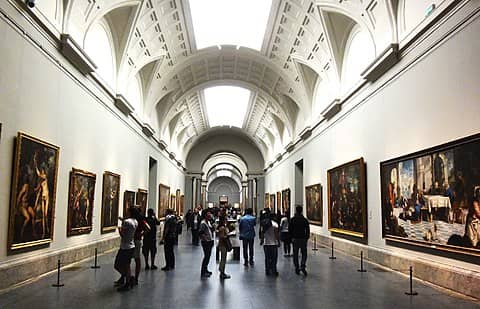 Source: Wikimedia
Prado is second only to The Louvre in Paris
The collections include paintings, statues and other pieces from the 12th to the 20th century’s. Francisco Goya is the most represented painter in the museum but you’ll also get to see Titian’s and El Greco’s, just to name a few. With this plan you can visit it in just 2 hours.

Next priority to visit:

Two ‘squares’ in fairly close proximity to one another, Plaza mayor is actually a rectangle and Puerta del Sol a semi-circle. Both are located centrally in the city and are surrounded by splendid architecture. Puerta del sol is home to the clock that chimes 12 bells at the New Year as Spaniards eat one grape for each chime, a good luck tradition. 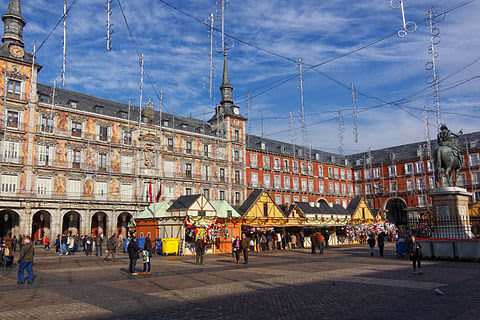 Source: Wikimedia
Plaza Mayor is always buzzing!
If you’re in need of a little sugar fuel while you’re in the area, head to San Gines Chocolateria and order Chocolate con churros, a Madrid tradition, which has been being served here, 24 hours a day, 365 days a year, since 1894. 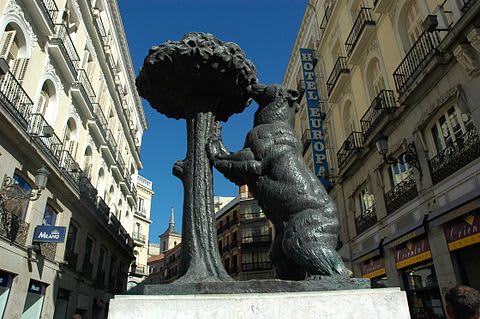 Source: Wikimedia
Madrid Bear at Puerta del Sol
Mercado San Miguel
If you’d choose a meal over a sugar stop then pop into this market, right around the corner from Plaza mayor, and have your choice of fresh tapas. It can be crowded at Mercado San Miguel so be prepared to stand around tables as you eat. 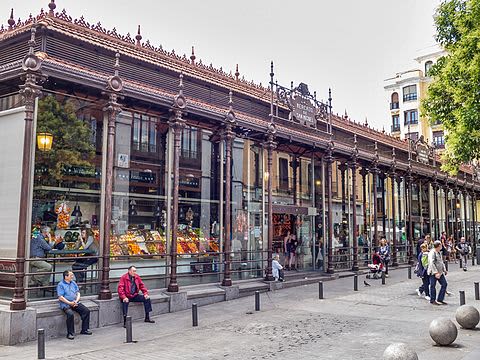 Over 300 acres of green space and at least five separate gardens El Retiro Park is considered ‘the lungs of Madrid.’ Throughout the summer months there is a free concert at midday each Sunday given by the Banda Sinfónica Municipal. But if you miss that don’t worry there is plenty else to explore, the lake with a monument to a past king, the rose garden with a fountain statue and many temporary exhibit halls amidst hundreds of trees and expansive green space. 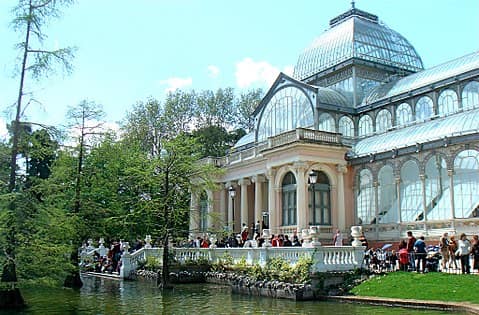 How to spend your 1 evening in Madrid

Spanish food is unreal, and each corner of the country has its own specialty. From Galician pulpo (octopus) to Andalusian gazpacho Spaniards have perfected many different dishes and Madrid is where they all come together. So, eat as much as you can handle!

And while you’re eating, keep in mind that Madrid has the highest per capita rate of bars of any European city. So, also keep your thirst quenched in any one of its many watering holes. Gin-Tonic is the drink of Madrid and you will have dozens of varieties to choose from. 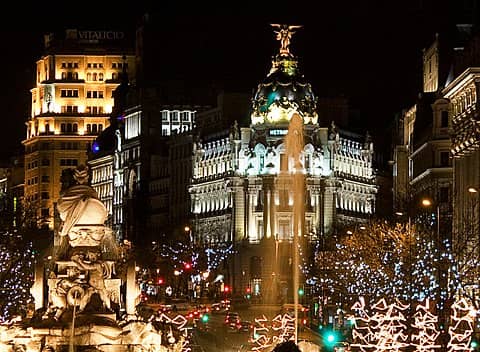 Or if you’re ready to go a bit outside of el centro check out el barrio Malasaña. A trendy alternative neighborhood of Madrid.

What you cannot do in a day in Madrid

Neighborhoods
A city like Madrid with its large size and diverse population is home to many unique and interesting neighborhoods. Whether you head to el barrio Salamanca to people watch and rub elbows with the rich and famous as they stroll in and out of shops like Chanel or Gucci. 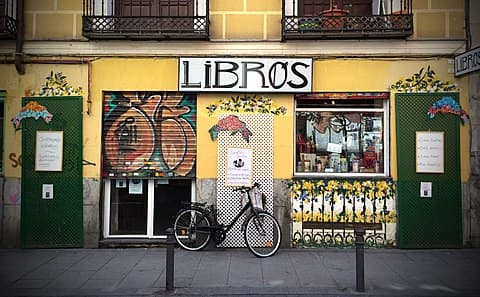 Source: Wikimedia
Barrio Malasana - quaint stores and hip little bars
Or if you go of towards el barrio Chueca where the gay community thrives and trendy neighborhood joints abound. There are days’ worth of corners to find and stones to overturn as you meander through the less visited spots in Madrid.

Basilica de San Francisco El Grande
You may be a bit confused if your Spanish isn’t up to par as you can only get admission by a Spanish language guided tour, but here the central Goya fresco won’t need words.

Tips to visit Madrid in a day

Do I need advance booking of Attractions?
It depends. If you’re headed to Madrid in high season it’s advisable to book both the Royal Palace and the Prado Museum in advance to avoiding waiting in long lines.

How to travel within the city?
Walk! If you’re sticking to el centro you can get around on foot. But if you need it there is a great network of buses and metros. It’s €1.50 for a single ride or €8.40 for a one day transport pass, which also gets you to and from the airport.

Should I buy a City card?
Not recommended. The Madrid card costs €47.00 for 24 hours and it offers free entrance to many attractions. However, Prado museum costs €15.00 and the Royal Palace costs €11.00 so for your one day itinerary it won’t earn you any savings.

Should I take the city sightseeing bus?
Might not be worth it. For €17.50 you can get a one day hop-on hop-off ticket for two possible routes around Madrid. The Madrid HoHo bus has good reviews too. But, in just one day you won’t have a chance to spend much time in any of those places so you won’t get much value for your money.

Recommendation on walking tours
A self guided tour is better than a guided tour. If you hit the el centro hot spots I suggest you’ll essentially do a self-guided walking tour of that area. Guided walking tours are generally a great way to see an overview of a city and decide where you want to spend more time later, but in just one day you don’t have that luxury. And with these types of tours lasting 2-3 hours it can fill up a good chunk of your day.

More than 1 day in Madrid?
Is definitely recommended! There’s plenty more to see and do. If you can spare the time, or come back again, check out a 2 or 3-day itinerary for Madrid.

Yes! It is still possible to get a good taste of Madrid even if you only have 24 hours in the city.

My suggestions for 1 day in Madrid

There are many companies that run tours of the Madrid centre and cover all the major sights. I recommend Sandeman’s free tour. This daily tour starts at 1030 AM from Plaza Mayor and ends by 1 PM at Plaza de Isabel II (Metro Ópera). The tour is recommended for its coverage of old city and the stories that guide narrate which makes Madrid monuments come alive.

If you are keen on a private tour

If you want a small, personal service, I will recommend this instead of the free walking tour. They run a 4 hour tour of Madrid tailored to those who want a flavour of the city in a short time. They will pick you from the airport or from the airport hotel.

If you are a DIY kind of person, you might be interested in the 90 minute bus tour that provides an overview showcasing major buildings and monuments of Madrid. The round tour starts every half an hour from Mayor Street, costs only 12 euros. The tour has commentary in English.

My recommendation is for the 2.5 hour walking tour

Select one of three museums

Madrid is synonymous with three big museums, The Prado Museum, Thyssen-Bornemisza Museum, and Reina Sofia National Museum, all located close to one another. On a one day visit to Madrid, it is impossible to see all the three museums. You need to shortlist only one of them.

Prado is the tall boy of 3 museums and renowned for its collection. Reina Sofia houses masterpieces representing Modern art, while Thyssen Museum is good, if you want to learn classical art fundamentals.

My personal choice is Prado museum. It is possible for you to get a good look into Prado in two hours. Prado museum has free entry for 2 hours from 6pm till they close at 8pm. On Sunday the free entry starts at 5pm.

Admire the sunset amongst Egyptian ruins

Thanks to not-so-well-synchronized time, the sun sets pretty late at Madrid. You can admire the breath taking sunset at Debod Temple.

Do not miss out on the Flamenco

Madrid has some of the best Flamenco shows in Spain. Make sure to book your show at a tablao. Pay only for the show because dinner is not great at these places. This post has reviews of flamenco shows in Madrid.

Madrid is a nocturnal city; nightlife at Madrid starts after midnight. The Bar is a fundamental part of Madrid's culture - Gin & Tonic, Vermouth and Sherry are some of the drinks you must try in Madrid. Depending on your time and energy, follow this well written nightlife guide.