Interesting things to do in Rome

1. Dinner date with a local

Have a meal with a local, take a food tour or enroll for a class on how to make pasta or a pizza. Bookings can be made here 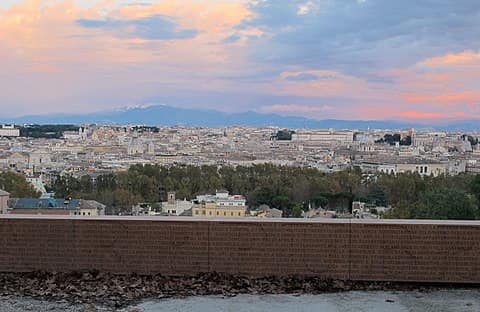 Source: Wikimedia
Climb up the Gianicolo (Janiculum) hill at sunset to get amazing views of St. Peters and Rome. On weekends, you can enjoy a free Neapolitan hand-puppet show. 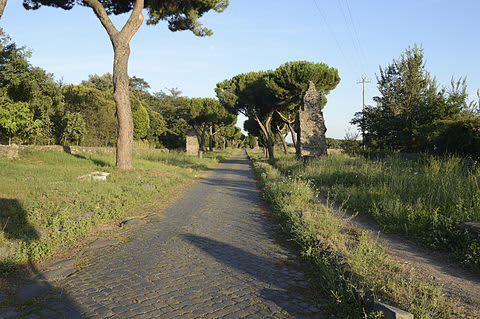 Source: Wikimedia
Take a bike ride on The Appian Way (La Via Appia Antica), the first long-distance road constructed by the Roman Empire. It is easy to rent bikes at the park itself. 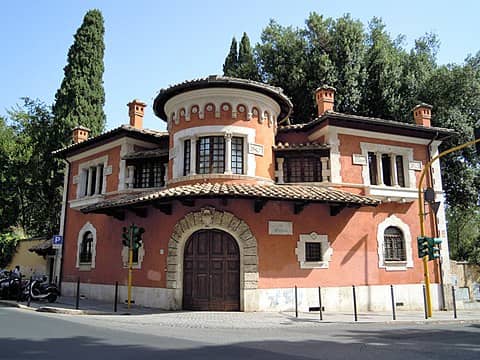 Source: Wikimedia
Visit what was once the home of Mussolini. Inside the compound you will find oddly designed building, the House of the Owls. 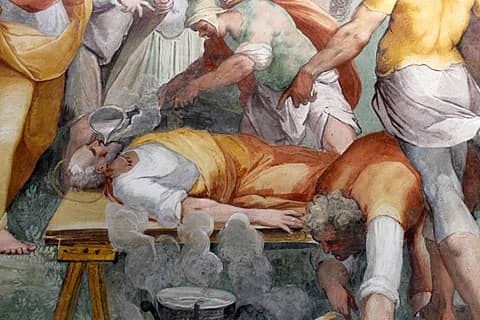 Source: Wikimedia
Fresco of the martyrdom of Saint Primus, who is being forced to swallow molten lead.
I like San Stefano for its circular architecture, its pagan temple origins, and mainly for the grotesque depictions in the frescoes all over the wall. These paintings were supposed to prepare missionaries for martyrdom. San Stefano is very close to the Colosseum. 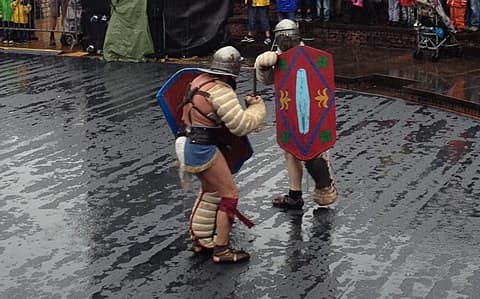 Source: Wikimedia
In this Gladiator school, Instructors teach children how the gladiators battled in ancient Rome and let the kids take part in a mock fight. The whole experience lasts about two hours. 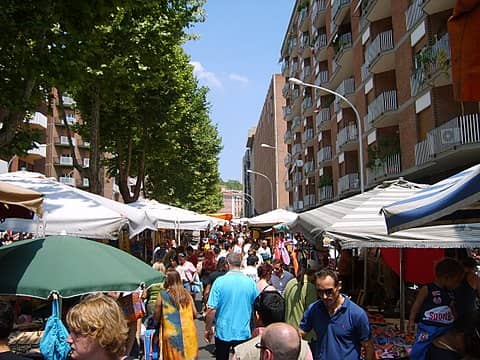 Source: Wikimedia
Porta Portese on a Sunday morning
Visit the food markets where the locals go such as Porta Portese,the biggest market of Rome or the more famous open-air market Campo dei Fiori.

8. Visit of the cemeteries

A characteristic activity in Rome, but unusual for a tourist, is certainly that of visiting the cemeteries. Going down to the metro B Policlinico you can walk to the Cemetery of Verano, an ancient monumental cemetery where graves are real works of art, the atmosphere is quiet and a bit decadent.

Acattolico (Metro Pyramid) is cemetery for the non Catholics. You pay an entrance fee of € 3 so that they can manage the family of cats that reside within the complex. 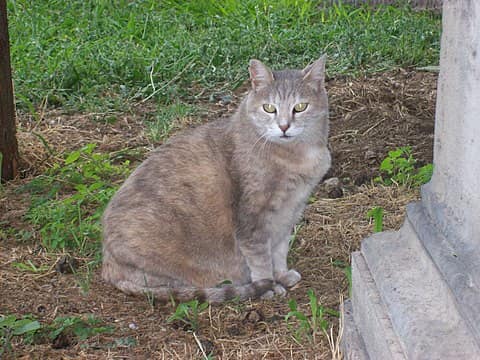 Source: Wikimedia
Cats at the Acattolico

An artisan chocolates set in an ancient and evocative chocolate factory.They still retain the original copper stamps and other tools that was used for chocolate processing in the early twentieth century. 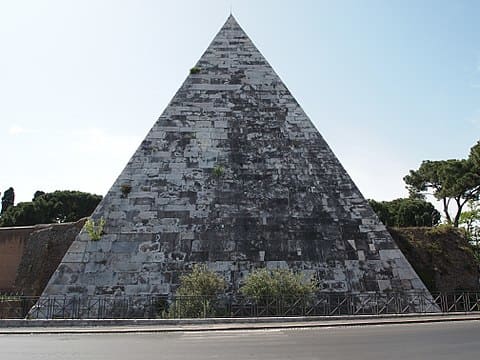 Source: Wikimedia
If you get bored of Roman architecture, visit Pyramid of Cestius, an Egyptian-style pyramid in the heart of Rome. Easily accessible as it is right next to the Piramide metro station.

If you have a flair for adventure you should take a short walk across to Coppede Quartiere, from Villa Borghese. You will definitely enjoy the quirky houses in this part of Rome, a pleasant relief from the archaeological attractions of the Historic Centre.

13. Take a break to see street art of Rome

The districts of Pigneto, Quadraro, and Ostiense have great examples of contemporary street art.

You must make it a point to visit the old aqueducts of Rome if you happen to be around the Quadraro district. It is little away from the city but can be reached by Metro Line A.

This zone just outside the centre of Rome was meant to celebrate 20 years of Mussolini's rule in Italy with an international exhibition.

16. See the church dome that isn't actually a dome 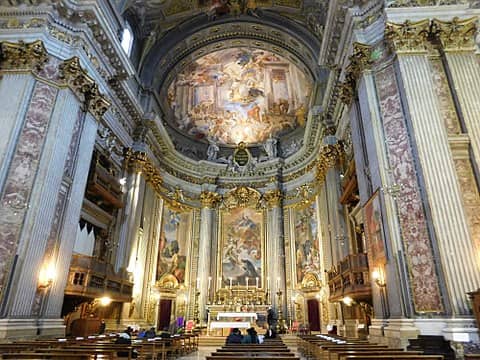 Source: Wikimedia
If you go to the church of Saint Ignazio, you can see the remarkable optical illusion painted on the ceiling. This particular church was originally supposed to have a grand dome to finish the roof, but when they ran out of money, they commissioned Andrea Pozzo to paint an optical illusion that would look like a dome from underneath.

Rome is known for its ancient Roman and Renaissance architecture, so for a change of scenery come to the quirky Zuccari Palace where architectural 'monsters' are swallowing every window and door frame.

18. See the playground of the mad Emperor

If you know anything about Roman history, you will probably know something about the mad and hedonistic emperor Nero. At the Domus Aurea you can see where he once built extravagant dwellings of ivory, marble, man-made lakes, and mosaics covering the walls. This was a place made just for pleasure, and even though Nero's successors were not as impressed with the extravagance, you can still see where he used to spend his time. 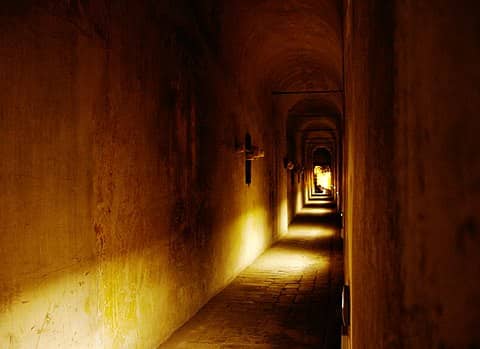 Source: Wikimedia
When Pope Clement VII was stuck in the middle of dangerous political disputes and religious reformations, and was stuck in the fabulously wealthy St Peter's Basilica, the small number of guards left had to sneak him out. They took the underground passageway to Castel Sant’Angelo where he ended up being held prisoner while the city was looted and many other people had to flee for their lives.

20. Go to the spot where St Peter was crucified

If you go to Montorio you can find the beautiful temple that has been built on the spot where it was said St Peter was crucified. The church holds many beautiful works of art and looks out over Gianicolo hill, but the true gem is the small temple in the middle of the square courtyard.

My suggestion for you is to follow my 2 street rule. If you find yourself on a busy tourist infested road in Rome you should just duck into any lane and go 2 streets deeper off the main road.

I have found that this is one of the best ways to discover any city, especially Rome, where the central areas tend to be full of tourists all year round. But do remember that Rome is also a city where millions of local people stay, and they do not stay on the main streets.

1) Relax in one of the Villas of Rome.

Rome still hosts the old patrician villas that until the nineteenth century were lapping the city and were on its edge and that today are instead integrated within it. The largest are Villa Ada, Villa Borghese and Villa Pamphili. Villa Ada and Villa Pamphili in some stretches are wooded and have a vegetation that does not seem touched by man. They are a place where you almost forget the city. There are also Italian-style gardens and the monumental buildings of the families that owned them.

The reserve connects two parts of the city, from Ponte Nomentano, to Montesacro, to the district of Ponte Mammolo. The path of about 6km continues along the bank of the river Aniene between the reed beds and the urban gardens and flows into the wonderful pratone of the Valleys and the Casale della Cervelletta park, a beautiful medieval building.

3) Visit the Crypt of the Capuchin Friars

For those who do not easily impress an unusual and little-known place to visit is the Cappuccini crypt in the Church of Santa Maria Immacolata in Via Veneto. The bones of 4000 Capuchin friars are preserved, a macabre spectacle made of massed skulls and bones arranged to form the decorations on the walls.

There are some nice vintage markets in Rome.