Four days is a perfect amount of time to get a good feel for the beautiful Andalusian capital city of Seville. Take your time to get to know this golden city that lives life in the slow lane. Be sure to lower your voices, turn off your phones and put down your maps to notice all that goes on.

Accommodation for your 4 day Seville visit

El Arenal or Barrio Santa Cruz are good choices if you’d like to stay centrally to all the attractions, in a city known to be easy on the wallet. Sitting along the river bank you’ll have ease of access to the Cathedral, the Alcazar, and many, many tapas bars. For a luxurious stay in a bright, opulent hotel with a rooftop pool check out Hotel Mercer Sevilla.

With 4 days in a small city you can also explore interesting areas to stay beyond the centre. For a local feel stay in La Macarena where you’ll be a walk from the sites but still have plenty to see around home. Tapas restaurants and bars remain plentiful in the area. For an affordable, comfortable stay around the corner from a bus into downtown is AC Hotel Sevilla Torneo.

Start day one off with a bang in the most enchanting place in all of the city. The Royal Alcazar of Seville. The jaw-dropping palace is still partially in use by the royal family today, but much of it is open to the public. Originally designed by the Moors the Alcazar has a history of much transformation under different ruling parties but its earliest known mention is in the early 900’s. An extravagant, beautiful place is like this is not to be missed. Purchase your tickets in advance to avoid standing under the hot Andalusian sun for too long. General admission tickets are €9.50. 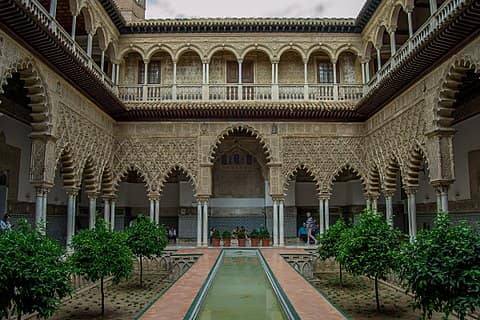 Source: Wikimedia
Many artisans were common to Alcazar and Alhambra.

Sitting in close proximity to Muslim northern Africa it’s no surprise that much of the culture of Seville retains the Moorish influences of the past. After spending the day amongst the stunning architecture of the people why not sample some of their food, too? Nearby the Alcazar is El Rincon De Beirut.

Plaza de España looks almost as if it belongs amongst the historical buildings of the city but if you notice something a bit off that’s because this neo-Renaissance/Moorish style building was actually constructed in the early 20th century. There was much controversy over whether it was too much for the city, or if it would fit in, both before and during its construction for the 1929 Ibero-American Exhibition. You can be the judge of its appropriateness but there’s no denying its impressiveness. The brick building features two tall towers and a canal out front where you can take a Venetian style paddle in a gondola. 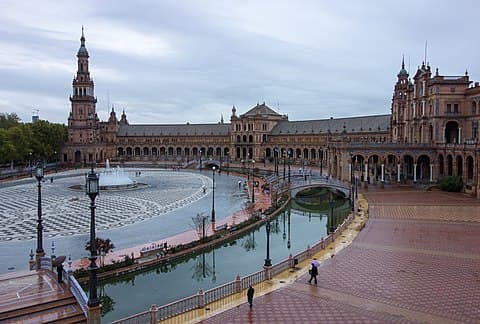 Source: Wikimedia
Take time to note the 48 alcoves with benches, each representing a province of Spain.

Adjoining the Plaza de España is the 100 acre Marie Luisa Park. It’s full of trees, monuments, flowers, pavilions and lots of green space. Take a slow, leisurely slow under the shade of the trees to ward off the summer heat. Lay in the grass or pack a picnic.

Start your evening with an icy Cruzcampo, the local beer of choice. Then fill up on tapas and at one of the multitudes of choices throughout the city. Try Blanco Cerillo in the city center which specializes in fish, or Bar Santa Marta where you can try the Andalusian classic, Flamenquin, a pork-heavy fried roll.

Later in the evening head to a flamenco show, Seville is a great place to take in an authentic experience as this is home to the people who first started the now famous dance. El Tablao Flamenco Los Gallos holds two shows each evening with a professional cast.

Now that you’ve got a feel for Seville from down below climb up to the top of Torre del Oro for a birds eye view over the city. The gold tower, as it’s called in English, was built in the 13th century and used to keep watch over the river, today it houses a museum dedicated to Seville’s naval history. But perhaps more interesting to the ordinary visitor is the climb up the steps (no escalator) to the views across the city and its river. General admission costs just €3 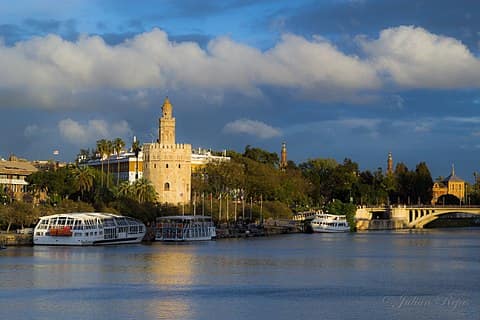 Source: Wikimedia
Toto del Oro was built by the Almohad rulers to control access to the Guadalquivir.

Ready for viewpoint number two? Check out the Metropol Parasol. While a bit away from the rest of the tourist attractions, reaching it is worth the few minutes walking. A new structure, designed by a German and completed in 2011 the Parasol is interesting enough from the ground, its designs are meant to integrate the nature around Seville as well as mimic the vaults of the cathedral, but climbing up may be the high point. €3 gets you to the top, a great view at sunset and a €1 discount at the bar. Depending on your interests you may also want to head down below to check out the ruins there. 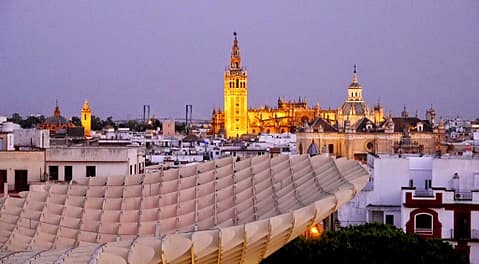 Source: Wikimedia
Go up to the Metropol Parasol roof for fantastic views of historic Seville

Your last day in Seville

After seeing the cathedral vaults in mushroom form at the Metropol Parasol it’s time to see the real thing. When the Seville Cathedral was built in the 16th century it was the largest cathedral in the world. Today it still stands at number four. The huge, magnificent building is said to be the final resting place of Christopher Columbus though that fact is disputed. What is indisputable, however, is the sheer impressiveness of the cathedral. If you’d like to gain free entry and avoid the large tour groups of the broad daylight go before 9:30 or on Sundays. Otherwise, entry is €9 and should be purchased in advance during high season. There is a dress code. 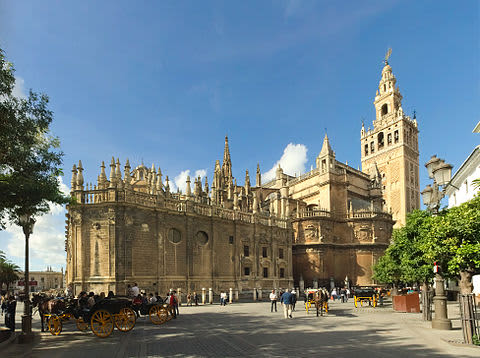 Your cathedral ticket also gives you access to the Giralda, the cathedral's bell tower originally a minaret of a mosque. You’ll climb mostly up ramps, rather than stairs, built that way for ease of equine access. Despite a bit of exertion, the view from the top is entirely worth the effort.

Summer advice for Seville
Andalusia is famous for its heat and Seville wears the hottest crown. Stay alert into the evenings when Spanish families come out of their cool dens into the fresher evening air, that is when the city starts to speak and laugh, sing and dance. Become a part of it, it’s the best thing there is to do.

Spend an entire day in Triana

Triana is the working class part of Seville across the river from the historic city where most of the attractions are. With 4 days you should surely keep a day to spend in Triana.

The best flamenco is in Seville. You can choose from so many shows from smooth and polished performances to downright gritty and earthy ones.

Seville is the perfect base for day trips

You cannot miss going on a day trip from Seville. Some of my favorites in this list include Cadiz, Jerez, and Ronda.

The cubiertas tour is less common than the Giralda climb but is a much better experience in my view, that allows you to learn about the construction and see the huge building from a very unusual viewpoint.