Without a doubt sample these 5 foods in Barcelona

Calçots are chives served with a delicious and very typical sauce called romesco, it is made with tomatoes, peppers, etc. Calcots are best had in a barbeque. If you are going to Tarragona, try them there as Calcots originated from Tarragona.

Where to go - In Barcelona go to El Jardi de l’Apat for a calcotada (a barbeque of calcots!). Combine this with your Park Guell visit, it is almost next door. This place has with nice views of the city below. If you are in the city, head to L’Antic Forn (the old oven) in El Raval,

Pan con tomate is bread with tomato, served on coca bread. It is delicious. The coca is a kind of bread, but much thinner (looks like pizza) and is served with very different ingredients. This is also a typical food during the festivity of Sant Jordi, but then it is served sweet.

Where to go - El Atril in El Born makes the best Pan con tomate. It is a charming place, no hang ups, with good service.

Arroz negro is black rice a typical dish with squid or cuttlefish. The black colour is because of the squid ink. Also added in are garlic, peppers and other seafood.

The cargols are snails that are served with different sauces, the alioli (with garlic) being the most famous. Spicy sauces are also served along with it.


Source: Wikimedia
Cargols means snails
Where to go - A nice central place for Cargols is El Disbarat in Gracia.

The famous Catalan cream is like crème brulee, a delicious and traditional dessert with crunchy caramel ... one of my favorites!

Where to go - Head to Granja M Viader just off La Ramblas. 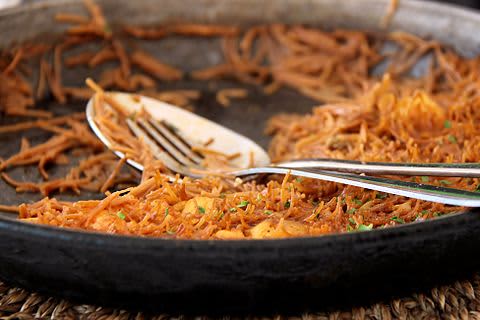 Source: Wikimedia
Fideuà is almost like a seafood paella except that fideuà (a generic word for noodles) are used instead of rice. As with most Catalan food, cooking fideuà is an art. The noodles are first browned and then seafood broth (clam) is added slowly until the noodles are fully cooked. Many traditional restaurants in Barcelona include fideuà as part of the regular 'menu del dia' (meal of the day).

To try Fideua, head to Restaurant Can Majó on Carrer l'Almirall Aixada, by the Barcelona beach. Ask for fideuà with squid ink.

Anchovies have a strong connection to Barcelona. According to folklore, Catalonians embraced the art of salting fish from ancient Greeks. Soon, it became one of the most popular foods for both the classes and masses. Anchovies are served at most tapas bars and always had with Cava (sparkling wine).

In Barcelona, you must try at El Xampanyet, a traditional restaurant famous for its house-cured anchovies and other traditional food. 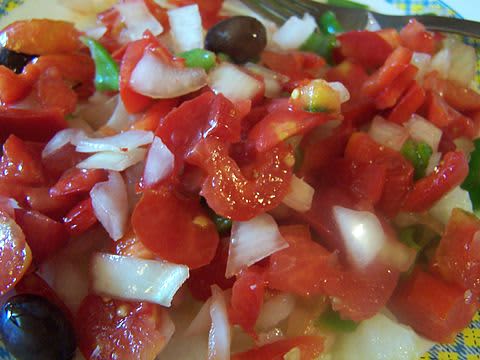 Source: Wikimedia
Esqueixar is a popular salad of shredded bacallà (bacalao). The tasty cod fish is unique to Barcelona [Catalan region] Esqueixar is a colorful traditional food that you must try.

The recommended place to try Esqueixar in Barcelona is La Vinateria del Call, a tavern-style wine bar located in the historical streets of the old Jewish neighbourhood in Barcelona. You can have a cava, a beer and vermouth to wash down the Esqueixar. 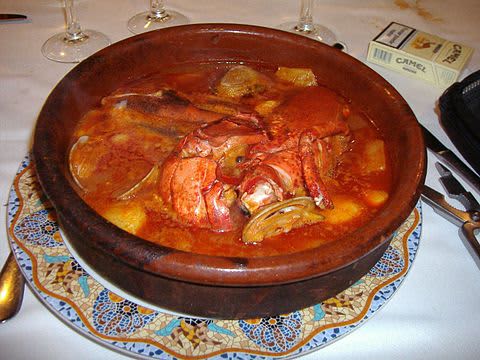 Source: Wikimedia
Suquet de Peix is an everyday food made with wide variety of fish. The story is that this fish stew was invented by fishermen as an ingenious way to use all the fish that they could not sell.

To try an authentic Suquet de Peix in Barcelona, head to Torre D'Alta Mar restaurant, located at the top of the tower, where the Teleferic starts from Barceloneta beach. At Torre D'Alta Mar, enjoy great views as well as some incredibly delicious traditional food of Barcelona. 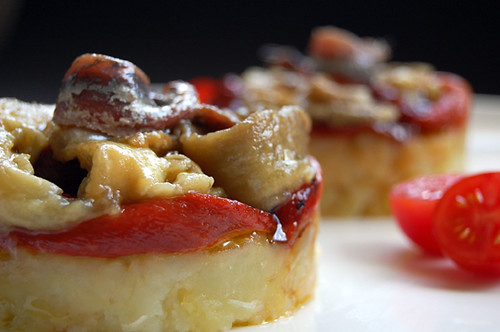 In catalan, escalivada means slow cooking over the ashes. The dish is a mix of vegetables, aubergine, red pepper, onion and tomato grilled in the embers of a wood fire. As can be inferred, this dish is popular with vegetarians coming to Barcelona.

To try Escalivada in Barcelona, head to Sesamo, one of the top rated vegetarian restaurants in Barcelona. 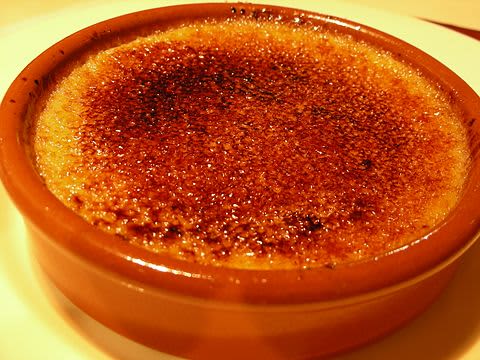 Source: Wikimedia
Crema Catalana, a traditional custard dessert of Barcelona, is referred as a cousin of crème brûlée. This dessert was first served exclusively on the day of St. Joseph, which is March the 19th (Father’s Day). Of course, today it is a popular dessert available all across Barcelona.

Try Crema Catalana at Granja Viader, a traditional chocolatier that opened its doors way back in 1870. While at Granja, do not miss their Cacaolat.

This is a traditional seasonal food of Catalan peasants. It is made mainly with fava beans (also known as the broad bean) and slices of botifarra (Catalan blood sausage). Tradition is to prepare this dish in harvest season in an earthen ware dish.

Try this dish at Els Quatre Gats, the restaurant with a rich history. This Barcelona restaurant was the meeting place for famous artists throughout the modernist period in Catalonia. Later on, it was a favorite haunt of Picasso. The menu of this restaurant was designed by Picasso himself.

You cannot leave Barcelona without trying the molecular cuisine in the city. This nouvelle cuisine was really made world famous by Ferran Adria of El Bulli restaurant (now closed).

ABaC by Chef Jordi Cruz, is located in the serene environment of Tibidabo. This is a sophisticated restaurant, Michelin starred and priced accordingly!

Tickets by Albert Adria, is the right place for sophisticated, molecular Tapas or as they say "La Vida Tapa."

I recommend the Nostrum franchise, it is very cheap and you can find authentic Catalan dishes. I recommend the escudela, a typical soup of Catalonia. There are very healthy options.

One of my favorite places to eat and have breakfast is The Pudding Bar located on Carrer Pau Claris. It is a magical place with a spectacular atmosphere, as the design is reminiscent of Alice in Wonderland. It is inexpensive and offers vegetarian dishes, totally homemade and with very good quality products. I recommend the bagels and the carrot cake as they are delicious. The price per person is around 10-15 euros.

It has another Pudding coffee shop opened recently (av. Diagonal) but this time with "Harry Potter" aesthetic. Highly recommended to go with children, as they will enjoy the decoration and the different workshops they offer.

There is another very exotic Indian food restaurant called Mayura on Carrer de Girona. It has a very nice and elegant decoration. The chicken tikka masala is especially delicious. This place is not so cheap, the price per person is around 20-30 euros.

It is a very typical dish consisting of baked pork cheek. Normally it is prepared on embers or in a wood fired oven, it is the reason why its flavor is incomparable and delicious. It is accompanied by excellent vegetables and sometimes potatoes.
(Where to have : Restaurant Balmes Rosselló, Carrer de Balmes).

This dessert consisting of fresh cheese is very typical of the area, and is usually accompanied by honey and nuts of the first quality. When boiling the milk, lemon juice is added and this mkes the dessert very smooth as a result.
(Where to have : Segons Mercat.Carrer de Balboa).

This dish is very typical of autumn, as it consists of grilled mushrooms. Added is minced garlic, parsley, salt and olive oil. It is delicious as an accompaniment to meats.
(Where to have : Restaurant Cabaneros, Carrer del Vallespir).