Barcelona in two days is sure to be a whirlwind. Luckily you’ll have a full 48 hours as Barcelona just may not let you sleep. From architecture and history to food and fashion Barcelona has it all.

How to plan your 2 days in Barcelona

Luckily for you, Barcelona’s hot spots are pretty central. Gaudi’s main draws are in one area, that will be your day 1 while the arteries of Barcelona life past and present are a bit closer to the sea, where you’ll spend day number two.

What you will have to miss in 2 days

Two days is enough for the Barcelona highlights, the most magnificent attractions and the areas where most tourists visit. To see all of that plus the hidden gems and off the track neighborhoods, two days simply won’t do. 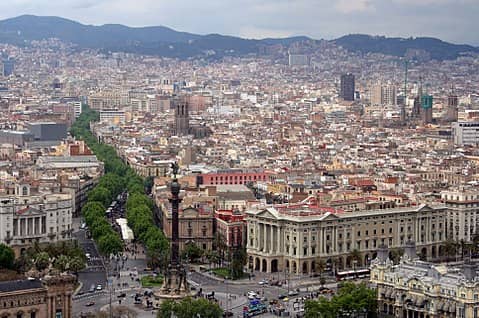 Source: Wikimedia
The green La Rambla snakes it way from the sea to Placa Catalunya

Day 1 will be Gaudi’s day

Experience the forward-thinking architectural style of Antonio Gaudi, Barcelona’s most famous designer. From parks to private residences, to a still to be completed church you’re sure to be impressed by Gaudi’s work. Even with a full day, you won’t be able to see all of the works dotted throughout the city but you’ll get a good feel for the most impressive ones.

Sagrada Familia
Perhaps the most famous of Gaudi’s works in the city the Sagrada Familia, which was started in 1882, 135 years ago, is still unfinished. Its beautiful skyline is broken with the cranes that still work to finish Gaudi’s dream. While 2010 only marked the mid-way point of construction current estimates say that the Roman Catholic church should be completed by 2026. Be awed by not only the outside by the stunning interior of the church. You should buy tickets in advance to avoid waiting in long queues. You can easily purchase online and tickets come in a variety of offerings. A simple entrance ticket is the most affordable at €15. And a ticket for entry, an audio guide and access to the towers, costs €29. 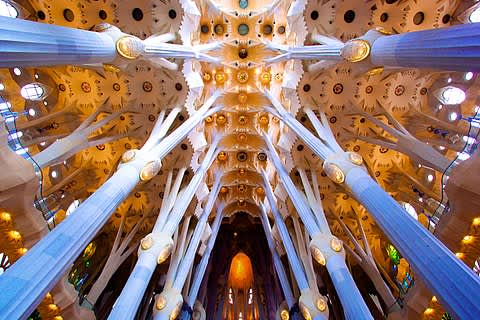 Source: Wikimedia
A forest of modernist columns holds up the roof of Sagrada Familia

Parc Guell
Completed by Gaudi in the early 20th century, Parc Guell encompasses the natural world and its organic shapes into the magnificent Gaudi design work. The park sits atop a hill providing excellent viewing opportunities of the rest of the city. While most parts of the park are free to access you’ll have to purchase a ticket to see the stunning sculpture garden, full of Gaudi’s mosaics. Book online and choose a time slot, you’re free to stay as long as you want. Tickets are €7.

Casa Vicens
Once you’ve seen Gaudi’s two most famous highlights you have a myriad of options of what else to see, the city is absolutely full of his work. Casa Vicens is a great choice as it is his first notable piece of architecture and varies in style from the park and the church you’ve seen already. Notice the Islamic influences and natural shapes used. The building was originally designed as a private residence, today it remains under renovation and is not open to the public but so much of the story is in the exterior. Pass by and take a look. 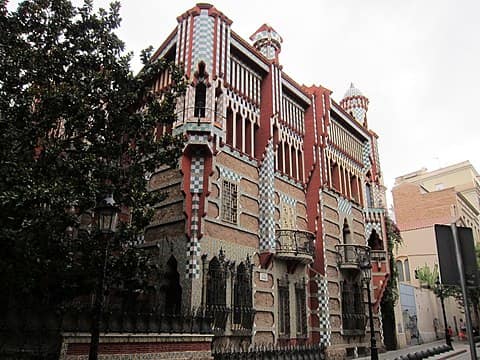 Source: Wikimedia
Casa Vicens is open to the public from late 2017

On Day 2 explore the heart of Barcelona.

See what Barcelona’s core looks like today and join both locals and tourists in experiencing the day to day city life in Catalonia.

La Rambla
La Rambla, a series of streets referred to as one, was actually not even a part of the original city of Barcelona, but as the city moved beyond its walls the streets became its main artery. Today La Rambla has been overcome with tourists, souvenir kiosks, and cafes. It’s turned into a bit of a show with living statues lining its sidewalks. Hold onto your bag tight as you make your way through the bustle but do enjoy this lively section of the city. 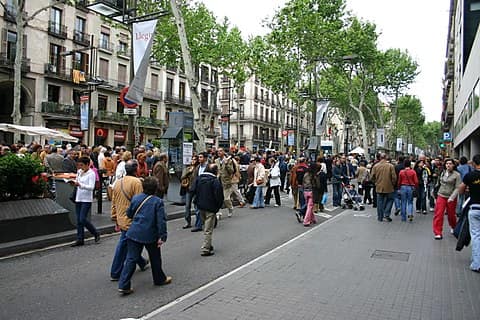 Source: Wikimedia
La Rambla is a must visit despite it being packed with tourists!

Gothic Quarter
Before La Rambla was a part of Barcelona the Gothic Quarter was already there. The area now includes the remains of the wall that once kept La Rambla out as well as the oldest parts of the city. The Gothic Quarter is an area where you will be best served mapless and phoneless. Let yourself get lost as you admire the architecture, the history, and the locals who hang laundry out their windows. Take in Barcelona at its core. 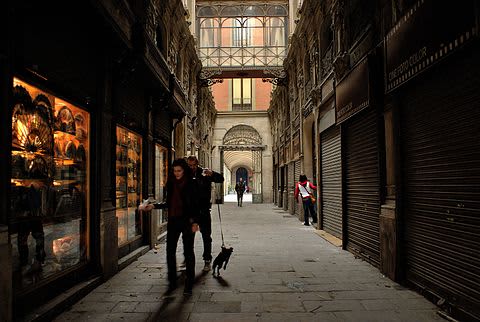 Source: Wikimedia
Gothic Quarter has a surprise around every corner!

Mercado de La Boqueria
When wandering gets tiring and getting lost makes your hungry head to the local market which first started as a small group of tables in the early 13th century. The building standing today didn’t come about until the mid 19th century and today you’ll find it full of all sorts of goodies. Settle down for tapas are take fresh produce for a picnic or to cook something up at home. If you can, shop at the stalls the locals are at. The oldest women speaking in Spanish rolling a shopping bag on wheels behind them are usually the best bet!

Barcelona has a unique vibe

The capital of Catalonia, a fiercely proud region in the northeast of Spain you’ll notice something a bit different here. The people are proud, they own their heritage, their history, their language and their culture. Soak it all in while you get a feel for Barcelona life.

Practical advice for a 2 day trip to Barcelona

Stay central on your 2-day visit

To make your short stay in the city as convenient as possible stay centrally to the spots you’re most interested in. The neighborhoods of Eixample and Ciutat Vella are both great spots give you ease of access. Do keep in mind that city center tends not to quiet down, even in the late hours of the night. So if you don’t plan to participate in the festivities, this may not be the best choice for you.

Walking is the best way to get around

If you’re staying near attractions and like walking (it’s the best way to see everything!) then stick with the single journey tickets for any rides you take.

Barcelona offers an extensive system of metros and buses. From Sunday to Thursday public transport closes at midnight, on Fridays it runs until 2 AM and Saturdays the system continues through the night. A 2-day travel ticket costs €14.50 with a 10% discount if purchased online. A single ride will run you just €2.15.

Queues at the Sagrada Familia can run very long. Book easily online, choosing your entry time, to avoid the wait. See this post for Sagrada Familia tickets advice. Parc Guell should also be booked online, it too has a choice of entry times.

The Barcelona card starts with a 72-hour option so it is not advisable for 2 day stays.

A basic Barcelona walking tour should take about 2.5 hours and will cover the basics, giving you a nice overview of the city and the option of what to spend more time on later. You can also choose more focused tours. Some are on Gaudi and Modernism or Tapas.

HoHo Bus could be worth it

While Barcelona’s main spots are centrally located there is plenty to see in the outer reaches of the city, and unlike years ago, the Barcelona of today is sprawling. The HoHo bus is a great way to get around without having to find metro or bus stops. At €26 for an adult ticket, you’ll gain access to 2 routes covering over 30 stops.

What to eat and drink in Barcelona

Be sure to eat tapas. If you walk past a spot that looks overcrowded, where there’s probably nowhere to sit and you’ll have to push your way to the bar, go there. You’ll have to get a little elbowy to order, don’t worry, this is the way things go, you won’t offend anyone. Order yourself a few tapas and eat them standing. Try croquetas, they can be of varying content but always have breaded exteriors. Also give an ensaladilla a try, also called Russian salad it’s more mayonnaise than leaves and while not the healthiest of choices it is quite delicious. Here are some more options on what to eat.

If you are visiting Barcelona with kids

For kids who aren’t afraid of flying high hop into the cable car which runs from Barceloneta along the coast all the way up to Montjuïc where you can enjoy the view of the city. If the kids have developed sea legs instead of air legs try a visit to L’Aquarium with its shark tunnel and thousands of fish.

Places to consider visiting if you are a couple

What’s more romantic than a picnic? How about a picnic with a view? Take a trip to Mercado de La Boqueria, or any of Barcelona’s food markets, and stock up on goods, then head up Turó de la Rovira, the highest point in the city for a romantic meal with a view. Here is a useful couples' itinerary.

No day trips on a 2-day visit to Barcelona
Barcelona has so much to offer it can fill up days or even weeks of your time. While there is plenty to see in the surrounding area, two days is simply not enough time to fit it in. Barcelona deserves time. Give it, at a minimum, three full days. But if you have the time to do it aim for five or six. Once you’ve done that you can take on an extra day for a day trip to the surrounding beaches and countryside.

I agree that is a great 2 day plan to visit Barcelona. Here are some suggestions:

Is Barcelona different on a weekend visit?

Barcelona is a bustling, lively city both day and night seven days a week. Bars, restaurants, and clubs are pumping weekdays and weekends. If you’re looking to do some shopping most places will be closed on Sundays. The city does get busier during the weekends and you may find tourist attractions are more crowded, however, especially in high season, tourists flock to the city every day.

How to spend your evenings in Barcelona

There is so much to do in Barcelona at night! As in much of Spain evenings quickly turn into night which quickly becomes morning. Don’t be surprised if the sun is shining on your way home, in fact, it’s the best way to make sure you’re living like a local!

Barcelona has some of the biggest and best clubs in Europe do a bit of research as what’s hot changes day to day. If you’re keen to sample more than a few spots in your two evenings you can get a €13.50 nightclub ticket giving you access to 29 clubs without waiting in line. Since clubs in Barcelona generally do have a cover this may end up saving you a few euro.

If clubbing is not your scene there is plenty else to do. Tour Gaudi architecture lit up under the night sky. Sip a cocktail at Boadas Cocktails, the oldest cocktail bar in town. Or watch the light show at Font Màgica.